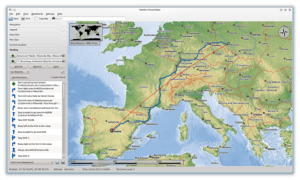 Marble packages are released together with many other KDE Applications and packaged in all major Linux distributions. Please use the package manager of your distribution for installation.
Debian: marble
Ubuntu: marble
openSUSE: marble
Linux Mint: marble
Fedora: marble
Arch Linux: marble
Gentoo: kde-base/marble

Marble Maps brings the highly detailed OpenStreetMap to your Android devices. It features a crisp, beautiful map with an intuitive user interface. We designed the map style to resemble the OSM standard tile layer, while introducing more vivid colors with a responsive selection of map features. Calculate routes to any destination and have Marble Maps guide you with its turn-by-turn navigation feature.

If you do not want to use the Google Play Store, you can download an APK or build the package yourself.

Martin Behaim and collaborators created the globe at the time of Columbus' first sea travel to the west. View fascinating 3D digital imagery from the original globe taken in an elaborate process over several years. The original globe can be visited in the Germanisches Nationalmuseum (GNM) in Nuremberg, Germany. Thanks to the GNM for making the data available under the CC-BY-SA license. 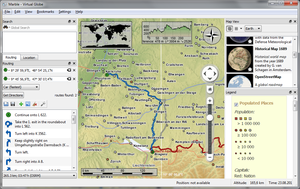 Is my PC running the 32-bit or 64-bit version of Windows? 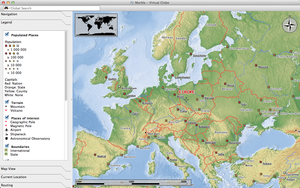 An Apple package to install Marble on Mac OS X.